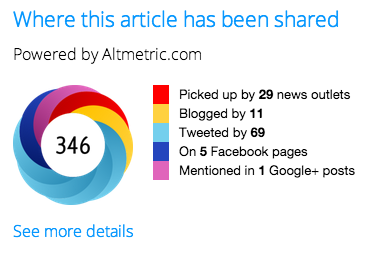 Altmetrics is the creation and study of new metrics based on the Social Web for analyzing, and informing scholarship.(http://altmetrics.org/about/)

Alternative to traditional bibliometrics such as citation counts and impact factors, altmetrics measures the impact of articles by counting mentions by social media sites and other web sources. It is a comprehensive set of impact indicators that enable numerous ways to assess and navigate research most relevant to the field itself, including:

Altmetrics (alternative metrics), as they have become known, consider a wide range of activity such as Tweets, Facebook mentions, shares on academic networking sites such as Mendeley and CiteULike, and article views and downloads.

Many databases (Scopus), online journals (PLoS, Wiley etc), open access archives (such as ArXiv) and Institutional Research Repositories now contain this type of article level metrics. An Altmetric Bookmarklet (once installed) is available to capture this data in Google Scholar.

Alternative metrics measure the impact of articles and outside of the means of traditional publishing, including such venues as: